On Saturday Jan 22 at MetroSquash, Illinois Squash 9-person team will play a match against the new UChicago women’s team starting at noon.

All welcome to come watch & there will be additional college matches happening throughout the weekend.

If interested in playing on team or any questions, reach out to illinSquash@gmail.com

Haley recently moved to Chicago in 2021 to start business school.

Originally from Brooklyn,  she began playing squash at the Heights Casino. During her junior career she reached a highest national ranking of #1 U19, was consistently ranked top three in her age group, and was a three time National Finalist.  She represented the United States at three Junior World Championships, helping the team to its first ever second place finish during her final appearance in 2011.  She was the winner of US Squash’s DeRoy Sportsmanship Award presented annually to one male and one female ranked junior who has best represented and demonstrated the principles of fair play and sportsmanship during their junior career.  While competing individually she was a four-time letter winner at Packer Collegiate High School and captained the boys’ team during her senior year.

Haley’s playing career was interrupted during her senior year when she suffered a torn ACL followed several months later by a torn meniscus.  While recovery was an arduous journey, her injuries and two resultant knee operations gave her the opportunity to build upon her coaching skills, in both individual, private lessons and school, team practices.

Following this playing hiatus and a successful rehab program, Haley finally embarked upon her professional squash career in the fall of 2016.

In July 2020, Haley did a Virtual Squash Workout for squashers to stay active during COVID lockdowns.

Pro exhibition & mixer is POSTPONED! Stay tuned for opportunity to watch some fantastic exhibition matches & get on court to learn from the pros in 2022!

With the first women’s mixer being so much fun we want to keep the momentum going and are all set on Sunday November 14th from 11am-1pm.

Bring non marking/indoor shoes. There will be loaner rackets and goggles available so please do not let that stop you from joining.

Very much looking forward to seeing all of you on the court again,

With the first women’s mixer being so much fun we want to keep the momentum going and are all set on Wednesday November 3rd from 5.30 – 7.00pm

Where: University Club of Chicago – 11th floor courts 1 – 4
When: Wednesday November 3rd from 5.30 – 7.00pm
Who: All of our female members regardless of any status like having played squash before, being an athletic member, being an athlete etc. Everyone should feel welcome and comfortable
Entry: Complimentary! Please register in advance on the club’s website “CLICK HERE”
Disclaimer: A mask is required for your path of travel (*wearing a mask at all times is recommended*)

There will be loaner rackets, goggles, and shoes available so please do not let that stop you from joining.

Very much looking forward to seeing all of you on the court again,

That’s a wrap for Women’s Squash Week 2021! Great to see so many old friends and meet some new! Illinois Squash partnered with local clubs & pros to host 4 events this year and we had a blast getting on court with everyone!

Here’s some pictures and we hope to see you all on court.

Check out upcoming events on our Calendar.

Network with us on LinkedIn.

Wrap up Women’s Squash Week with free event at LifeTime Vernon Hills on Sunday 9/26 from 1-4pm. 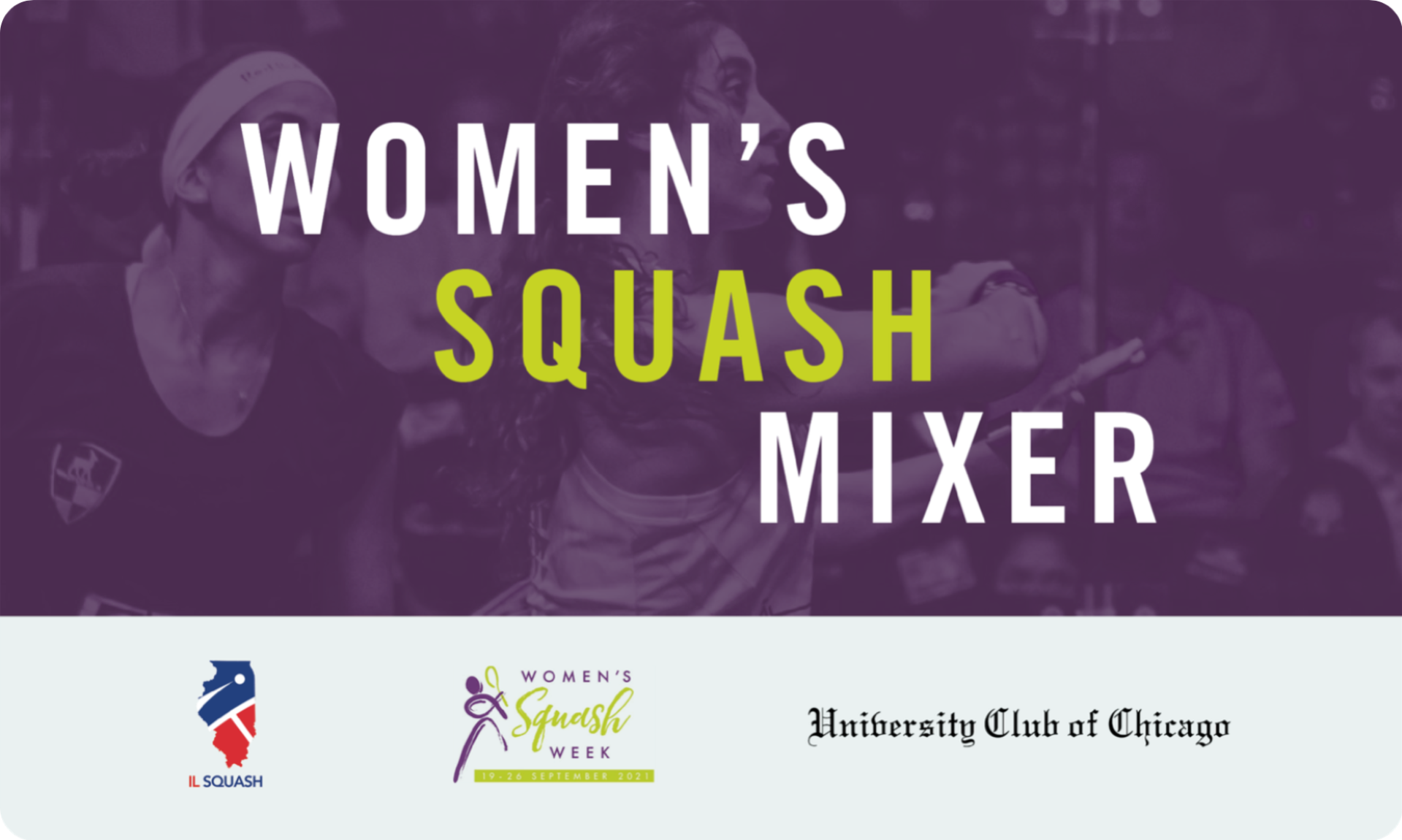 If you’ve ever wanted to get onto the court and try out squash, tonight’s the perfect night for it.

This is a great opportunity to meet and mingle within the women’s community at the Club, and to learn a new sport. If you’ve played squash before, this is also a great time to show someone what squash is all about or to share some pro tips.

Registration must be made in advance

*Masks are required unless seated and/or eating and drinking.